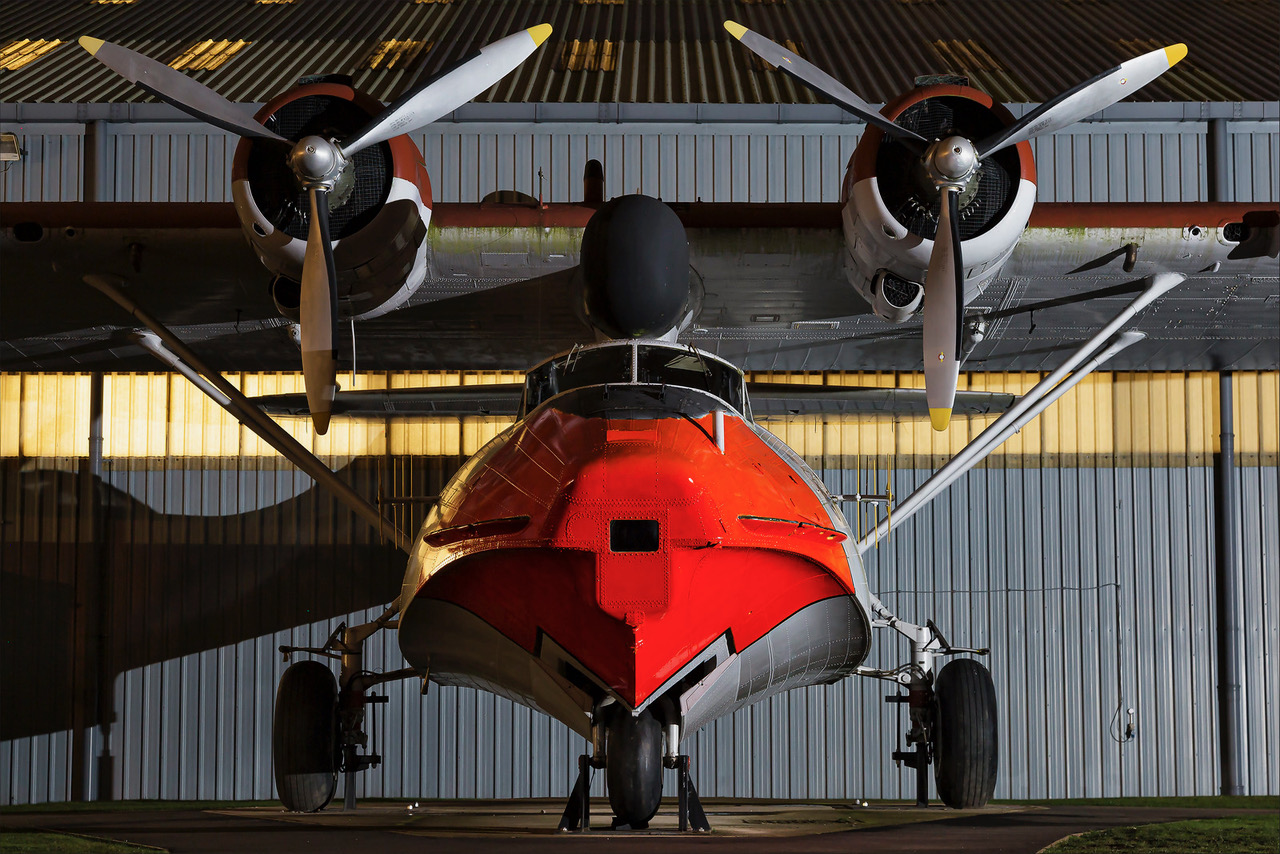 This feature is taken from the latest edition of The Catalina News, the hard-copy magazine that is mailed to all subscribed members of The Catalina Society – see the memberships tab on this website for further details of how to join and support the operation of our Catalina Miss Pick Up. If you have any information about surviving Catalinas then do please get in touch with us here. The Catalina Society website hosts probably the most accurate and up-to-date Catalina Survivors listing to be found anywhere. A word of explanation – to be consistent, the listing, and this feature, describes Catalinas by their original designations when built. Visit our Catalina Survivors List here.

Here in the UK, the former Royal Danish Air Force PBY-6A L-866 continues to be displayed outdoors at the Royal Air Force Museum (RAFM), Cosford.  Your Editor enquired about its future prospects given that its removal from indoor display over two years ago was supposed to be temporary.  Michelle Worthington, the museum’s Communications Manager spoke to the Head of Collections and Conservation Centre Manager who reported that in the time the Catalina has been outdoors it has been regularly maintained and repainted, receiving the same duty of care as other aircraft in the collection.  Although its external control locks are not in place, the moveable control surfaces are locked from within the cockpit.  The Catalina will however remain outside until room can be found for it within the museum’s buildings.  Let us hope that this will not be too protracted.  Meanwhile, it was one of the featured aircraft at Cosford’s March 2020 Photography Night Shoot event just before the Coronavirus lockdown.  It has to be said that she looked good in the floodlit conditions.

The busiest hive of Catalina activity in the world at the moment must be at American Aero Services located at New Smyrna Beach, Florida.  They currently (March 2020) have PBY-5A N459CF and Canso A N983CF both owned by the Collings Foundation, the wings of PBY-5A N287 of the Cavanaugh Flight Museum and PBY-5A N7057C of the American Airpower Museum and, finally, the dismantled PBY-5A N4582U being restored for an as yet un-named Russian museum collection.  Further information about American Aero Services and its Catalina work can be found in the Summer 2020 edition of The Catalina News magazine.

A Catalina that regularly crops up on websites is the wrecked PBY-5A N5593V which is high and dry in the desert of Saudi Arabia’s Red Sea in the Gulf of Aquaba in Tabuk Province.  We most recently wrote about it in Issue 90 following Paul Heasman’s visit to the site.  The wreck is now in very poor condition and probably beyond economic restoration.  Over the years it has been visited at its remote resting place by photographers and vandals but it now finds itself in an area to be developed.  Sitting close to Saudi Arabia’s borders with Egypt and Jordan, there are plans to build ‘NEOM’, a hi-tech city that will incorporate ‘smart city technologies’ and also function as a tourist destination.  Michael Slage, Director of Strategic Planning, Tourism & Heritage for the NEOM project, contacted us a few months ago advising that there were tentative plans to get the wreck restored, at least externally.  If I get any more news, it will be published in these pages of course.

PBY-5A N84857 has been with the Whidbey Air Museum and, later, the PBY Memorial Foundation and its associated museum the PBY-Naval Air Museum at Oak Harbor, Washington State since it was acquired in December 2008.  At the beginning of this year, the museum’s name changed to the Pacific Northwest Naval Air Museum.  Although the name reflects the wider remit of the museum, it is nonetheless a shame perhaps that the ‘PBY’ element has disappeared from the branding.

Also in Washington State, PBY-5A N9505C continues to sit somewhat neglected at Ephrata.  Its US registration was cancelled back in August 2012 but registration is now pending to a new, un-named owner with an address in Manhattan, Montana.  Time will tell what this means for its future.

In Canada, the derelict hull of Canso A 9825 has been disposed of by the Canadian Warplane Heritage Museum, possibly as long ago as 2016, and it is now with Vince O’Connor at his site at Uxbridge, Ontario.  O’Connor runs the firm O’CON-Aircraft Supplies aka The Movie Hangar Inc and sources aircraft and parts for the film industry.  It remains to be seen what this means for the old Canso.

Next, a couple of news items from Hawaii.  Commemoration events to mark the 75th anniversary of VJ Day include the transport of various US WWII aircraft types to Oahu by transport aircraft and ship before the main events at Pearl Harbor between August 29th and September 2nd.  Among the airworthy warbirds that are due to participate are a Catalina although which one has not yet been announced.  Sadly, it is unlikely to be John Sterling’s N24VP – see item below.  Meanwhile, a seller on eBay recently advertised for sale a piece of wreckage purporting to come from PBY-5A BuNo 2487 of US Navy patrol squadron VP-11 which was destroyed when it crashed into a hillside near Makapu’u Light, Oahu during an instrument let-down on April 5th 1942 killing all nine crew on board.  It was apparently recovered by rock climbers in the Spring of 2019.

The aforementioned PBY-6A N24VP had been intended as a participant at the Pearl Harbor commemoration events later this year but it remains at Ocaña in Spain where work continues to return it to airworthy condition.  Towards the end of 2019, work on replacing fabric surfaces was completed but during engine runs in October, the port engine failed.  In April, John Sterling advised that as soon as Coronavirus travel restrictions are lifted, arrangements will be made to ship a replacement engine to Ocaña for fitting to the airframe and it is possible that the good starboard engine will be replaced at the same time with a lower time unit.  N24VP is one of three PBY-6As that were reverse engineered with PBY-5A rudders and elevators decades ago when imported into Canada from the USA.

Now for some news from the Antipodes.  The one-time USAAF OA-10A VH-SBV was rescued from a fiery fate on the Port Moresby, Papua New Guinea fire dump way back in 1976 by New Zealand’s Museum of Transport & Technology (MoTaT).  It had previously had a varied career, starting with the USAAF in the Pacific and the Far East and later flying with Cathay Pacific Airways and Trans Australia Airlines.  When restoration proved beyond the resources of MoTaT, the Catalina passed to the Royal New Zealand Air Force (RNZAF) Museum (re-named Air Force Museum of New Zealand in 2009).  Initially, some work was carried out on the partially burned centre section using parts from a wrecked Canadian registered Canso A, C-FSAT whilst other parts were placed in store at various locations.  Recently, it has been decided to cease restoration work for the foreseeable future.  This is not quite as bad as it sounds as the dismantled airframe is secure in long-term storage at the former RNZAF base at Wigram outside Christchurch on South Island, home of the museum.  Prior to being placed in store, work was carried out to eradicate some surface corrosion on the hull after which it was repainted with primer.  In addition, some structural work was done and the hull received a bow turret and blister turrets for the first time in many years.  It is to be hoped that one day restoration will continue.

Still in New Zealand, the airworthy Canso A ZK-PBY received new nose-art as long ago as March 2019.  It now sports a large decal on either side of the forward hull combining the earlier Wandering Witch emblem with a Pouakai or Haast’s eagle, once the largest in the world with a wingspan of up to 3 metres.  Extinct for the last 500 years it was a New Zealand native species and is used as the emblem of the RNZAF.  The combined nose-art on ZK-PBY was created by Kristi Holland, grand-daughter of one of its supporters, Collen Hoggard.  During the 2019 season, ZK-PBY appeared at a number of airshows and events – Wings Over Wairarapa at Hood Aerodrome, Masterton, North Island in February; her 75th birthday get-together at Ardmore, also on North Island; the biennial Classic Fighters show at Omaka, Marlborough, South Island over the Easter weekend when the new Pouakai nose-art was unveiled and the Ardmore Warbirds Open Day over the Queen’s birthday weekend in June.  In October, she was on hand at the New Zealand Catalina Preservation Society AGM at Taupo.  The Cat’ was then put into hibernation for the summer at Ohakea Defence Force Base, North Island.  On January 20th this year, ZK-PBY attended the Whanganui Heritage Weekend and carried out some air-to-air photography sorties.  Following that, it undertook a small odyssey to Northland on behalf of the ‘Society, an event that had been twice cancelled due to poor weather.  The event was hosted by the Kaitaia Aeroclub, that town being the most northerly major settlement on New Zealand’s North Island.  On the trip, stops were made at both Whangerei and Kerikeri in order to meet up with members.  After that, ZK-PBY flew to New Plymouth for some engineering and corrosion control on the upper wing after which it flew to Ardmore where she remains.  Since then, New Zealand airshows have suffered the same fate as others the world over with cancellations caused by the COVID-19 virus so it is likely to be the end of 2020 before she flies again.  Thanks to Lawrence Acket for the update.

Finally, our trip around the world of Catalinas takes us to Peru where, some years ago, a former Fuerza Aérea del Perú (Peruvian Air Force) Catalina was dismantled and dumped at Morona Cocha air base at Iquitos.  It seemed likely that this would be the end of the story but, miraculously, the airframe was re-assembled a while ago, possibly as far back as 2017, and is now back on display, minus engines, at the air base gate, painted in full FAP livery.  Quite what is holding it together would be interesting to know.   The serial and origins of this particular airframe are not known although it may possibly have been an ex-RCAF Canso A. 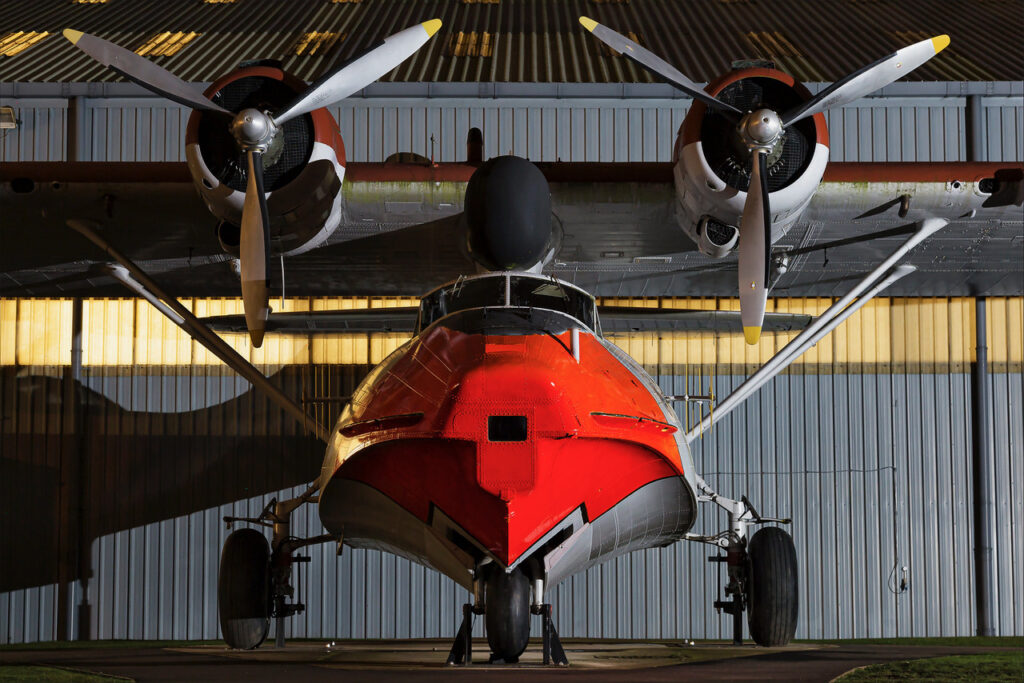 Former Royal Danish Air Force PBY-6A L-866 out in the open at RAF Cosford and all lit up for the March 2020 Photography Night Shoot event
Photo: Nick Jennings 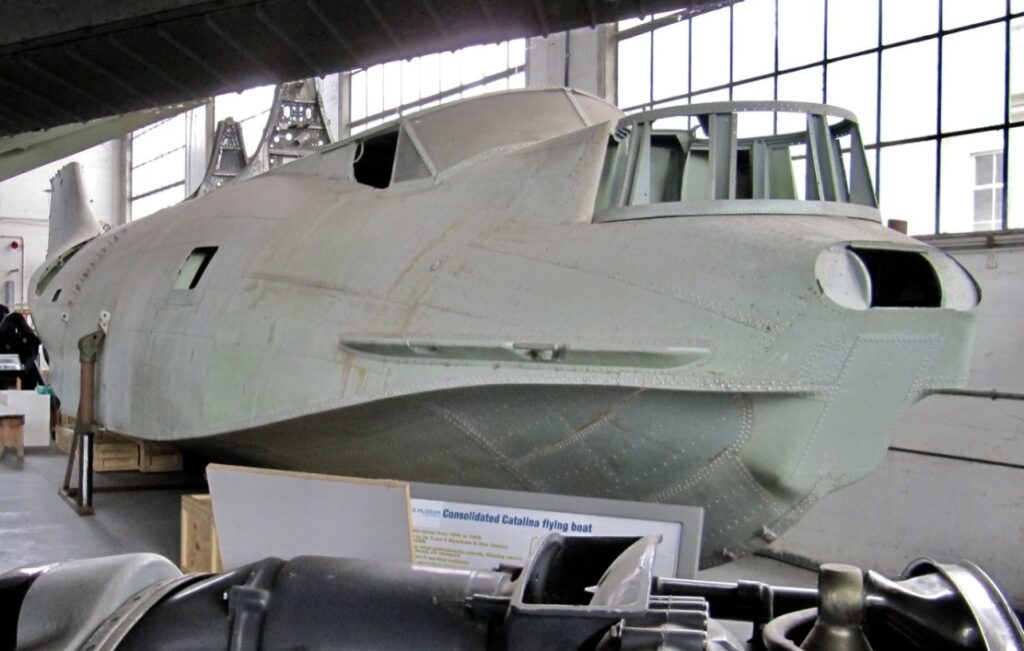 The Air Force Museum of New Zealand’s Catalina hull being prepared for long-term storage at Wigram recently. Its last registration was VH-SBV but it was originally a USAAF OA-10A Catalina
via Doug Rough

On these exciting flying days, enjoy IWM Duxford's huge outdoors and historic airfield as you watch iconic aircraft take to the skies. Experience flying and commentary, get up close to the aircraft as they park up on our airfield and have the chance to grab a chat with the pilots that flew them. With flying in the afternoon our showcase displays are perfectly timed to also fit in a morning of exploring the museum and exhibitions.