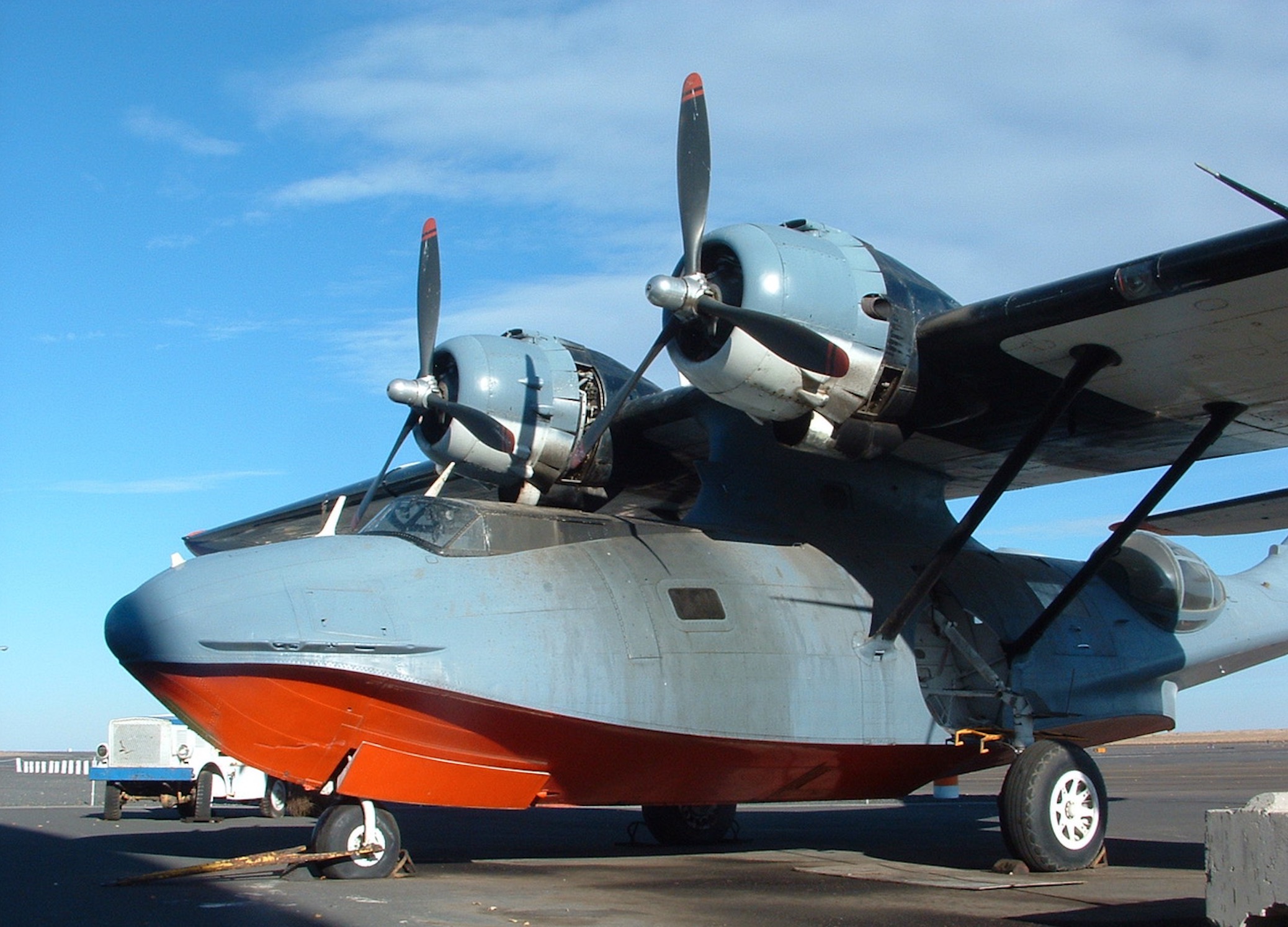 Plenty to report on again in this edition, the most significant news being the move from Europe to the USA by two airworthy survivors.

The trans-Atlantic delivery flights of PBY-5A PH-PBY and Canso A N9767 to Massachusetts and Oregon respectively are described and illustrated in some detail in our hard copy magazine The Catalina News.  For the record, PH-PBY was re-registered as N459CF to Tigers Flyers LLC of Stow, Massachusetts on June 28th, the day after its Dutch marks were cancelled.  The actual owner is The Collings Foundation and the aircraft has been flown on to American Aero Services at New Smyrna Beach, Florida where it will be returned to ‘stock’ wartime configuration.  N9767 was acquired by Stuart Barr in March and registered to his company Soaring By The Sea LLC of Eugene, Oregon on May 16th.  It has been kept busy appearing at shows in the northwest States and offering rides including water landings to lucky passengers.

As a result of the above movements, Europe only has one flying Catalina, our own Canso A G-PBYA Miss Pick Up.  The other, currently non-airworthy, airframes extant in Europe are as follows with their most recent identities shown: PBY-6A L-861 at Stauning in Denmark; PBY-6A L-866/8466M at RAF Cosford, England; Canso A F-ZBAR (dumped nose only) at Rochefort-Soubise, France; PBY-6A HK-2115P in the vicinity of Oldenburg, Germany; Canso A N315KM at Tatoi, Greece and for sale; PBY-5A 16-212 at Soesterberg, Holland; PBY-6A C-FIZO at Bodø, Norway; PBY-5A L-857 at Sola/Stavanger, Norway; PBY-5A EC-693 at Cuatro Vientos, Madrid, Spain; PBY-6A N24VP under restoration to fly at Ocaña, Spain and Canso A Fv47001 at Malmslätt, Sweden.  So, a tally of twelve is not at all bad although, potentially, both N315KM and N24VP will depart Europe once they have flown again.

One Catalina that was a resident in Europe between August 1997 and January 2015 is PBY-5A N423RS, once the US Navy’s BuNo 48423.  Donated by James Lyle to the Tunison Foundation Inc, and registered to them on December 28th last year, it has recently been moved from Fort Pierce, Florida to New Smyrna Beach in the same State, where it has joined the various Catalinas in the care of American Aero Services.  The Tunison Foundation also operate an airworthy C-47 and C-45 – the former known as Placid Lassie visited the UK and mainland Europe this year as part of the events commemorating the 75th Anniversary of D-Day.  N423RS was last flown as far back as March 2013 when it was moved from North Weald, Essex to Biggin Hill, Kent before being dismantled for the sea voyage to the USA; it is hoped that these recent developments will see the one-time Greenpeace Catalina back in the air again.

One Catalina formerly with American Aero Services is PBY-5A N287 owned by Cavanaugh Air LLC (Cavanaugh Flight Museum) of Addison, Texas.  Currently under restoration, the main parts of this aircraft are distributed around various locations with the hull being at Sherman, Texas and the wing centre section still with American Aero.  The control surfaces are being worked on at the museum’s Addison facility.

In Issue 91 I reported that the PBY-6A N4NC belonging to well-known pilot and collector Wilson ‘Connie’ Edwards was for sale at a staggering US$4m – I actually mis-reported it at $5m!  Sadly, Connie passed away in May this year and N4NC, together with his Canso A N222FT Flyin’ Turtle, were subsequently put on the market through warbird and classic aircraft broker Platinum Aircraft Sales, for more realistic prices, the latter at $475,000.  N4NC sold quickly and its new owner is the Mid America Flight Museum of Mount Pleasant, Texas.  It was delivered by air to Mount Pleasant on September 3rd this year.  The museum has a stunning collection of airworthy ‘warbirds’ so it would appear that the PBY has a good future ahead of her.  More news on N222FT when we have it!

At the end of last year, there was news of two former Wright Cyclone-powered ‘Super Catalina’ waterbombers, PBY-5A N31235 and PBY-5A N9505C.  N31235 has recently been the subject of a novel fund-raising drive for its restoration.  As reported in Issue 90, it is currently out in the open at the Palm Springs Air Museum in California and undergoing an in-depth restoration.  At the end of last year, a local blood bank partnered with the museum to raise awareness of the Catalina’s history and at the same time undertake a ‘blood drive’ to attract blood donors.  The Lifestream Blood Bank pledged to donate US$5 towards the Catalina’s restoration for each blood donor.  Great idea!  Meanwhile, N9505C, located at Ephrata, Washington State, was being actively marketed by Courtesy Aircraft Sales Inc of Rockford, Illinois for US$229,000.  Described as “originally modified as 28-ACF (sic – should be 28-5ACF) standard category configuration modified under STC SA-3-150 to Super Cat with Wright R-2600 engines and includes military and original logs since delivery”.  The airframe hours were quoted as 4,446 with 1,770 hours on the port engine and 890 on the starboard although there was no mention of when they were last run.  The company website went on say that no avionics are currently installed and the airframe needs fabric work and new tyres.  The interior was quoted as needing restoration although there was no mention of whether or not the waterbombing tanks are still installed.  An enquiry to the President of Courtesy Aircraft Sales, Mark Clark, prompted a helpful and swift reply to the effect that, as at the beginning of September, the Catalina was still for sale but not currently advertised.  It seems likely that because of the amount of work required to bring it up to scratch, it may not make economic sense to rebuild it to fly.  This Catalina was the star of the memorable opening frames of the movie Always – search the internet under Catalina Always if you’ve not seen it.  Maybe someone will come along and save her?

Stop press! – too late for inclusion in the magazine version of this article was the news that Canso A N315KM based at Tatoi, Athens has flown again.  It took to the air for the first time since 2006 on October 3rd.  A photo appeared in the June update on this website.

Finally, a word of explanation about designations used in this column and in the regularly updated Survivors listing on The Catalina Society website.  For the sake of consistency, I use the designation that pertained to an individual aircraft at the time it was built and entered service.  This will not necessarily be the designation used by registration authorities for currently airworthy examples.

World Catalina News is taken from The Catalina News, the 24-page, illustrated magazine that is sent twice annually to paid up members of The Catalina Society – see the ‘Memberships’ tab on this website.

Our good friend Heijo Kuil took this photo of N9505C at Ephrata, WA back in October 2008.  She still sits there awaiting a buyer