Nothing stands still in ‘Catalina-world’ so here are the latest happenings from around the globe…..

The first significant news concerns the PBY-6A HK-2115P which has sat forlornly in open storage at Villavicencio in central Colombia for many years.  Supplied to the Fuerza Aérea Colombiana (Colombian Air Force) after WWII it is believed to be a former OA-10B, the USAAF equivalent of the US Navy PBY-6A.  After withdrawal by the military, it sat on the dump at Madrid airbase at Bogotá for some years before being acquired by Giovanni Bordé who had restored it to airworthy condition as HK-2115P by 1994.  During the rebuild, spares were used from a donor airframe which remains on the dump still.  HK-2115P was subsequently impounded at Villavicencio, a familiar fate for aircraft in this area of South America, and remained there in ever deteriorating condition, still in the ownership of the Bordé family.  Advertised for sale from time to time, it was acquired a while back by a German citizen who later put it back on the market for $500,0000 as reported in our last edition. Presumably, no one came forward at that price and in December last year the Catalina was dismantled and transported by land and sea to Bremerhaven in Germany.  From there it was moved to Oldenburg where its new owner apparently intends to restore it to airworthy condition.  I will be very interested to see what original identity is quoted in official paperwork as the restoration proceeds.  For many years it has been quoted as ‘34012’ but for various reasons this is not possible.  Incidentally, the May 2018 issue of FlyPast reported on the move from Colombia to Germany but misquoted HK-2115P’s former military identity as ‘312’ – it was in fact ‘612’.  Similarly, the aforementioned donor airframe was ‘619’, not ‘319’.

The other important news involves the PBY-5A N4582U, originally with the US Navy as BuNo 46457 and later with the Força Aérea Brasileira (FAB or Brazilian Air Force) as FAB 11 and 6510.  In 1983 it was sold, along with several other retired FAB Catalinas, and flown to the USA where it ended up on static display at the Rescue Memorial Museum, Kirtland Air Force Base, Albuquerque, New Mexico.  During a routine checking of records, I discovered that its US civil registration was cancelled in December 2016 as ‘exported to the Russian Federation’.  Prior to that, it had been sold by the National Museum of the US Air Force to Roger B Kelsay of Hillsboro, Oregon who then sold it on to JG-5 LLC of Cave Creek, Arizona, the last US owners before being sold in Russia.  The airframe has been moved from Kirtland AFB and is currently at a location north of San Antonio, Texas.

Still in the USA, the Federal Aviation Administration continues to tidy up the US civil aircraft register by cancelling expired registrations.  On November 21st last year, no less than six Catalinas were cancelled.  They were all PBY-6As, registrations N9520C, N9531C to N9533C, N9553C and N9554C.  All had been registered to the Aircraft Instrument Corporation of Miami, Florida after being obtained from US Navy surplus stocks in the 1950s.  This company obtained a large number of US Navy Catalinas but the majority were reduced to spares and paperwork was obviously not kept current until the recent FAA intervention.

PBY-5As N68756 and N10609 have both been acquired by MotoArt who specialise in producing high quality artefacts from old aircraft.  N68756 has already been moved to California and N10609 will follow in due course.  The Summer edition of The Catalina News magazine has a full article on MotoArt’s Catalina activity – why not support us by joining The Catalina Society and receiving our magazine twice a year as well as help keeping our Catalina flying!

One other US register cancellation in recent months is that of PBY-5A N7238Z.  Its last US owner was Caribbean Airport Facilities Inc of Carolina, Puerto Rico and the marks were cancelled by the FAA on February 8th this year as ‘expiration’, the last Certificate of Registration, issued in September 2004, having run out in April 2015.  The aircraft itself has been in Australia for some time and is being worked on at Kilaben by the Rathmines Catalina Memorial Park Trust, Rathmines, NSW where she is known as Our Girl.  The plan is that it will be displayed as a static exhibit.  Terry Fahey, Restoration Co-ordinator provides this update: “2018 is well on the way now with 2017 a distant memory.  The landing wheel assemblies have been stripped out and are now in the process of being blasted and painted and their respective housings water blasted, to locate and allow any corrosion to be repaired prior to painting.  Most of the interior has been degreased and water blasted in preparation for paint.  With additional volunteers on board, we have had to expedite our infrastructure programme, providing cover for the two outer wing sections and connecting power and air to each work station.  A designated paint and blasting booth has been erected, blasting and paint racks manufactured and a new air compressor with the original re-located to the centre wing section.  These works have taken more than 50% of volunteer hours over the past few months and whilst this has slowed the restoration of Our Girl, it will allow an effective spread of work for everyone in the future.  Manufacture of the blisters came to a temporary halt, waiting for the delayed delivery of a powered Swage and Jenny machine to arrive in the country.  New profile rollers are now being machined to enable the manufacture of the ‘top hat’ profiles, specific to the Catalina blisters and then the challenge commences, making the respective fixed and rotating waist blisters and then fitting to the fuselage.  This task we envisage will take a minimum of six months to complete”.

Still in Australia, the PBY-6A VH-PBZ Felix operated by HARS (Historical Aircraft Restoration Society out of Albion Park/Illawarra Regional Airport, Sydney suffered an in-flight failure of its starboard engine in late-October last year whilst en route from its home base to display at the Rathmines Catalina Festival.  It was due to display along the shore of this wartime flying boat base but, instead, had to make a precautionary landing at the Newcastle Aero Club’s base at Rutherford airport near Maitland in the Hunter Valley.  HARS personnel worked outdoors over the winter months to carry out an engine change and on February 10th, Felix flew back to Albion Park.  HARS then wasted no time in getting the PBY back to work and she has appeared at various events including Temora Aviation Museum’s Easter Weekend Aircraft Showcase event at Temora, NSW and the Canberra Airport Open Day on April 8th.  Well done to all involved in getting Felix back in the air.

Further south in New Zealand, Canso A ZK-PBY has been active once again.  Lawrence Acket advises that she had an engine change due to bearing failure at the tail end of 2017 and then operated from New Plymouth at the start of the season, appearing at an airshow at Tauranga before going back to New Plymouth for the installation of engine pre-oilers.  Over the Easter period, ZK-PBY flew at the

Warbirds Over Wanaka show where she operated both from the airfield at Wanaka and the nearby lake.  The first display over the lake was in the company of six smoke generator-equipped Yak-52s, three on each side of the Cat’, and they carried out a spectacular starburst nose-on to the crowd.  Several splash and gos were carried out over the weekend although they were limited in number due to strong winds.  She is now positioned at Ardmore ready for the D-Day Warbirds Open Day there in June.  It will then hibernate and return to the air in time for the group’s AGM at Taupo, probably in late-October.  Thanks to Lawrence for that update.

Another Catalina in New Zealand is the former USAAF, Cathay Pacific and Trans-Australia Airlines aircraft at the Air Force Museum of New Zealand, Wigram.  Last registered VH-SBV, the partially restored airframe has been in New Zealand for many years, dating back to when the museum was known as the RNZAF Museum.  Marty Gardner, Technical Officer at the museum reports that: “…the museum is not undertaking any restoration on the Catalina or indeed any other projects for the foreseeable future due to other priorities.  These have included moving all the Catalina components to the Wigram site, some parts including the outer wings having been stored elsewhere for some years”.  Although progress may have come to a halt on the Catalina project, it is good that the airframe has been saved as, back in the 1980s, scrapping in Papua New Guinea was a very real possibility.

Will Shellenberger of the PBY Memorial Foundation reports that progress on its PBY-5A N84857 during 2017 seemed painfully slow but, looking back, a lot was actually done.  Most of the top surface of the wing centre section has been repainted, the navigator and radioman station tables are now complete, four bunks have been installed in the crew quarters, main landing gear wheel covers have been fabricated and a rear tail steady has been made and put in place.  The PBYMF currently resides at Pioneer Way, Oak Harbor, Washington State, having moved from NAS Whidbey Island a while back.  The Catalina stands in a car park area in the town alongside the museum premises.  However, plans are afoot for the construction of a new museum site on ten acres of land near Oak Harbor. 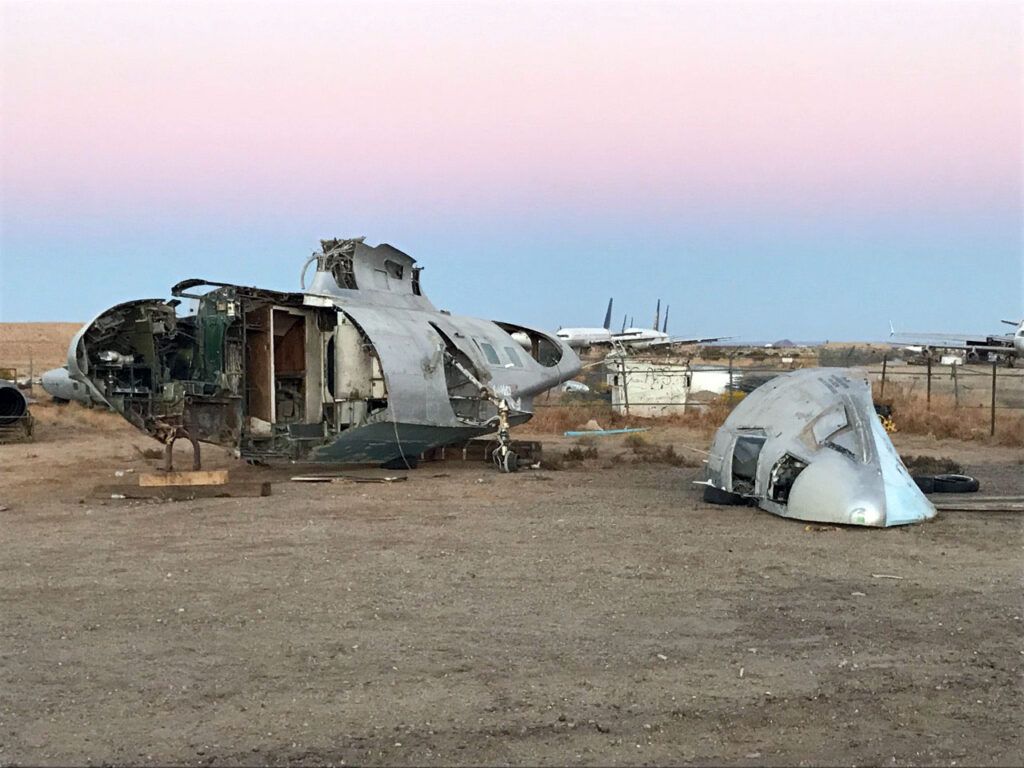 The sun sets on N68756 as she is sectioned at Mojave for conversion to artefacts by MotoArt
Photo: Dave Hall 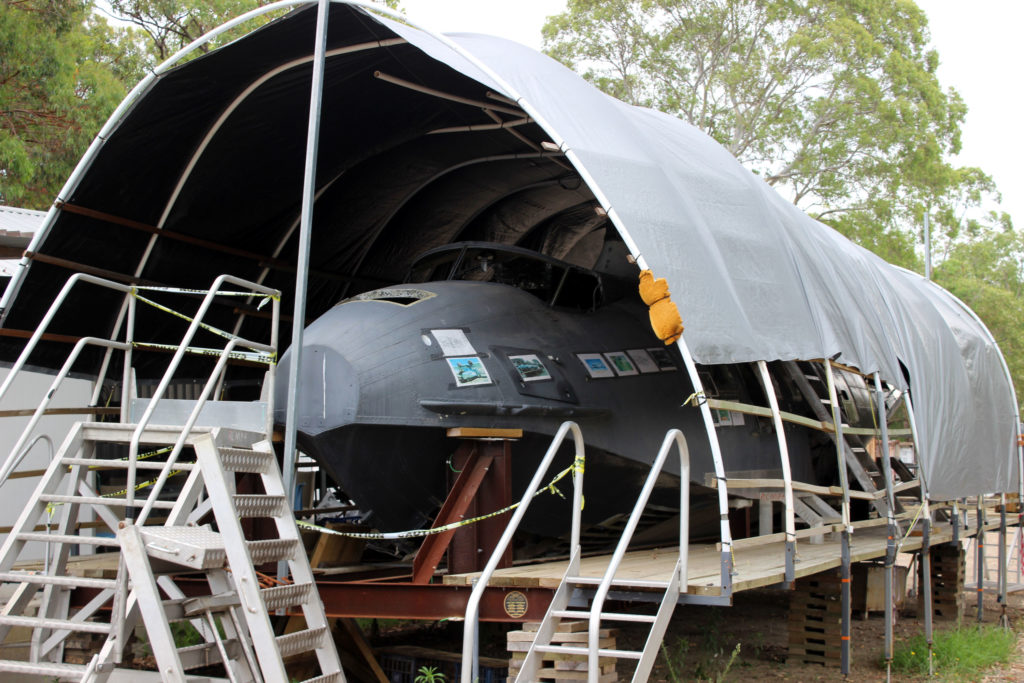 N7238Z Our Girl undergoing restoration in her poly-tunnel at Kilaben a few months ago
Photo:Ben Dargan 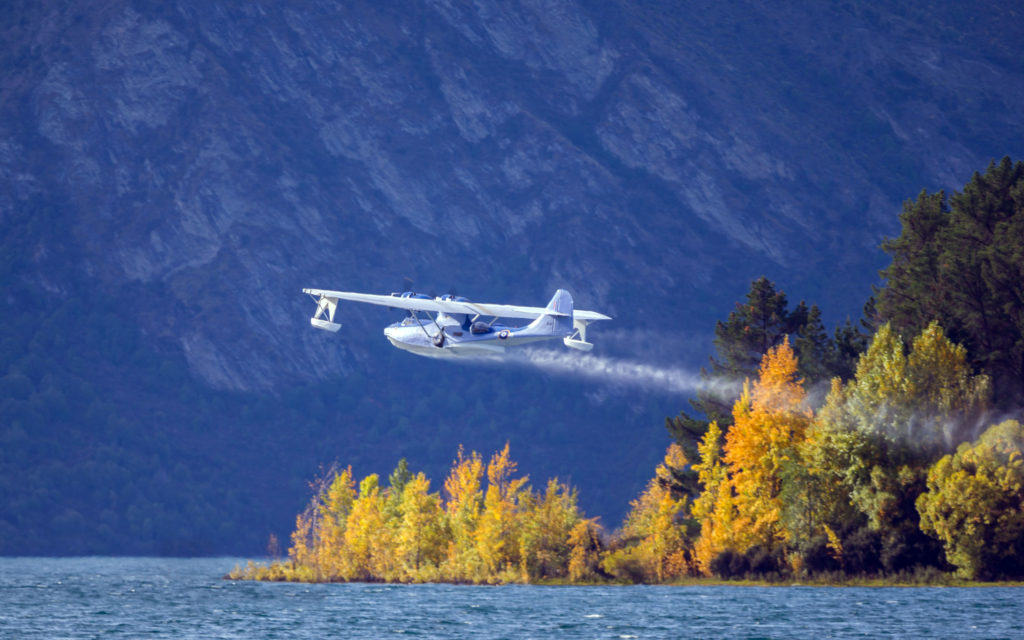 Gorgeous view of Canso A ZK-PBY taking off from Lake Wanaka at this year’s Warbirds Over Wanaka show on New Zealand’s South Island
Photo: Pierre-Etienne Langenfeld 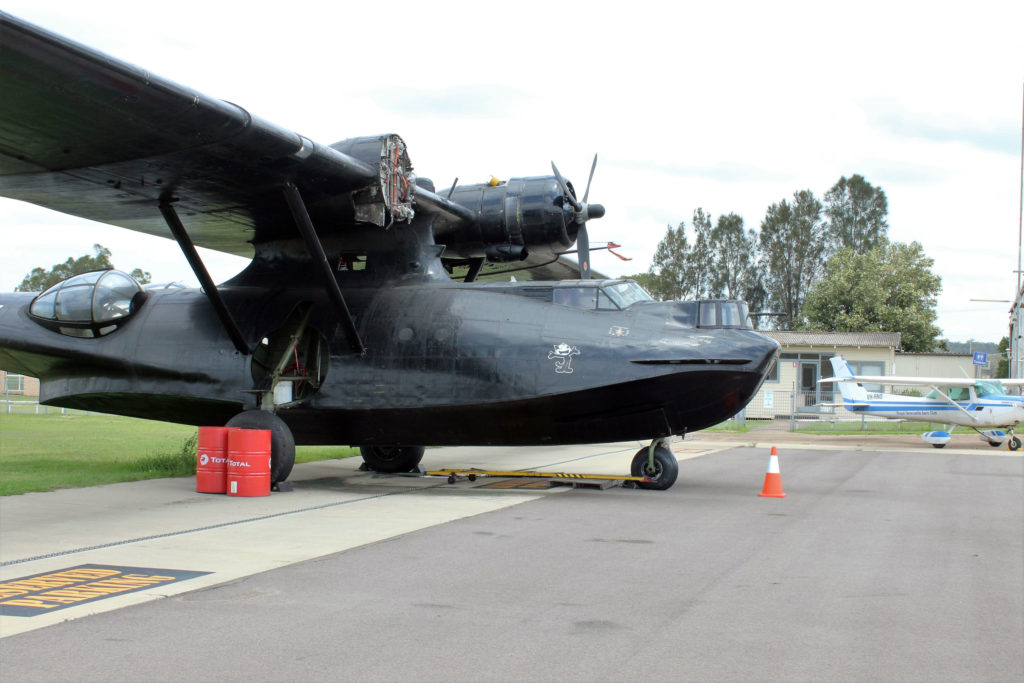 Ben Dargan and his Catalina Society member grandfather, Alan Percy, were able to see VH-PBZ Felix at Newcastle during its enforced stay over the winter due to engine failure
Photo: Ben Dargan