There has been a flurry of activity in the world of Catalina survivors since our last edition, many of them actually former RCAF Canso As, so here is an update.

Perhaps the most exciting news comes from Canada where, all being well, the world’s population of airworthy Catalinas and Cansos is about to be increased by one!  At Fairview, Alberta the former Canso A C-FNJE has been under restoration by the ‘Canso Crew’ of the Fairview Aircraft Restoration Society since its accident and sinking in the wilds of the North West Territories in July 2001.  The project to transport the damaged aircraft to Fairview was epic enough but since then the team has been working to get ‘JE back in the air again and her first flight is scheduled for June 18th.  You can be sure that we will report on this event in our next edition.

More good news in Canada, albeit not so great for the Canadians themselves, is the ‘rescue’ of another Canso A C-FPQK.  This former Government of Quebec Air Service water bomber has been stored in the open at St Hubert, Quebec since it was donated to the Fondation Aérovision Québéc museum by the Government in June 1994.  Its condition gradually deteriorated, the fabric control surfaces being particularly badly affected by exposure to the elements.  In February it appeared for sale on the Barnstormers.com website and it was quickly acquired by the Collings Foundation of Stow, Massachusetts, well-known operators of airworthy B-17 and B-24 bombers in the USA.  It was duly cancelled from the Canadian register on March 8th and received a new Certificate of Registration on the US register as N983CF on March 23rd.  The US reg is a slightly cryptic reference to its former RCAF serial 9830 whilst even more cryptic is the registered owner – CCT of 1979 B-17 Series LLC PBY Series!  Whilst it is sad that this Canso is leaving Canada – it was actually built at St Hubert so is leaving its birthplace – it will hopefully benefit from the Collings Foundation resources and return to the air, possible even for passenger flights like the other bombers in its collection. 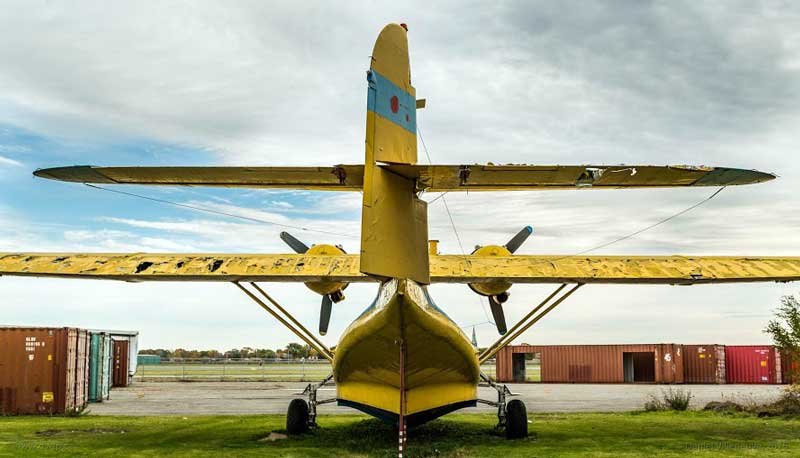 Canso A C-FPQK at St Hubert before its recent acquisition by the Collings Foundation.  The poor state of its fabric is evident via J-C Polet.

Another St Hubert-built Canso A N249SB was recently advertised for sale by Air Assets International.  At one time stored at Nanaimo, British Columbia (with our own Miss Pick Up before we acquired it) it was made airworthy for a single flight to the Evergreen Aviation & Space Museum at McMinnville, Oregon and since arriving there on November 6th, 2011 it has been on outdoor display in US Navy colours as 44-P-4 of Patrol Squadron VP-44 in the ownership of the Michael King Smith Foundation.  On February 6th it was re-registered to Falls At McMinnville LLC, Salt Lake City, Utah.  This organisation, part of the Falls Events Centers company, acquired the aircraft following the Michael King Smith Foundation’s bankruptcy and it seems likely that it will remain at the McMinnville museum. Indeed, a recent report in Air Classics magazine suggests that it will be moved to internal display which can only be a good thing.

Yet another aircraft on the market is one-time Canso A N5PY.  In its early civilian life, this was the famous four-engined ‘Bird Innovator’ conversion, destined to be a one-off.  Acquired some years ago by Ron Ruble it was flown to Aurora in Oregon and a project to return it to a twin with just the P&W Twin Wasps remaining commenced.  A huge amount of work has been required on the airframe and systems and in fact the project has never been completed.  According to Courtesy Aircraft Sales’ website, some $700,000 has been spent on the Inspect and Repair As Necessary (IRAN) so far and the advertised price is $675,000!  It will be very interesting to see who is willing to take this challenge on. 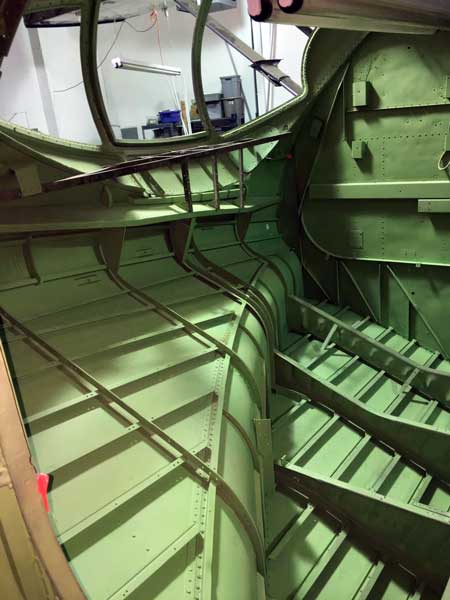 The interior of N5PY, once the sole ‘Bird Innovator’, has been thoroughly restored as this photo shows Courtesy Aircraft Sales website

Yet another former RCAF Canso A is ZK-PBY, airworthy in New Zealand.  Following a long period of remedial work, we reported its ‘first flight’ in February 2016 in our Summer 2016 issue of The Catalina News.  ZK-PBY has recently sported ‘Catalina Sounds’ artwork on its tail, thanks to sponsorship from the Marlborough-based wine company.  By the time this magazine goes out, the NZ display season will have ended but, all being well, ZK-PBY will have appeared on static display at the RNZAF Air Tattoo at Ohakea and in the air at the Classic Fighters Airshow at Blenheim as well as being on public view during the season at Ardmore and New Plymouth.  Last October’s New Zealand Catalina Preservation Society Inc AGM saw the aircraft fly up to Taupo from Ohakea.  It went out to operate on Lake Taupo for the occasion and took part in rescue exercises with the local coastguard unit.  The Friends of the Catalina Flyer magazine that supports ZK-PBY has been put together by Marlene Gray since its inception 23 years ago and she has just decided to retire.  Best wishes to her from the Catalina community.  Good job! 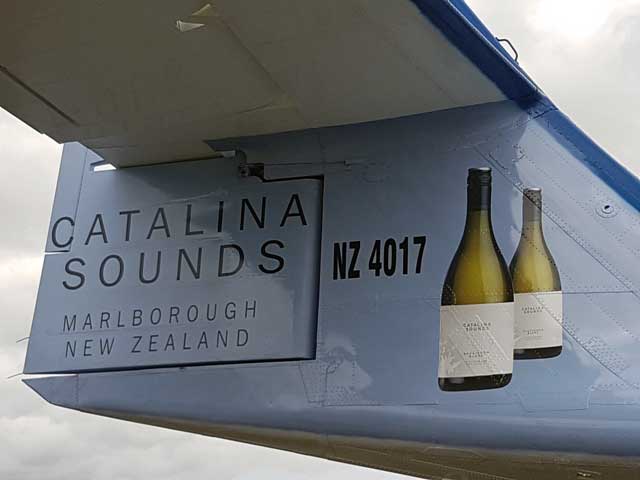 Miss Pick Up will be displaying at Sola-Stavanger in Norway this summer and for a brief period there will be two Catalinas on the airfield. Sola is home to a former US Navy and Royal Danish Air Force PBY-5A ‘48382’.  Originally BuNo 08109 then 82-857/L-857 with the Danes, it was rescued from dereliction in private ownership by the Flyhistorisk Museum, Sola and transported from Plejerup in Denmark to Norway by truck.  Over time it has been beautifully restored to represent a PBY-5A 48382/KK-A of 333 Skv, Royal Norwegian Air Force.  The museum has provided this update via Erik Thingbo, a Catalina Society member in Denmark: “A lot of work has been carried out on the Catalina and it is becoming more and more fully restored with time.  From the start, the priority has been to restore the exterior.  One problem has been to find engine cowlings but we now have the starboard engine covered and the other open.  We decided to have the ‘short’ engine exhausts in place and not the extended version used for wing de-icing.  A recent gift from the Danish Dakota Friends organisation was an oil cooler which is now installed.  This donation was arranged by Erik Thingbo.  The engine and cowling work has been carried out using professional working platforms that we now have in our inventory.  Attention is now turning to internal painting and the re-installation of equipment.  A good number of instruments and electrical items have been restored in our workshop and some of these will be installed in the navigator and radio operator stations although we are still working on the table and chair for the latter area.  The flight engineer’s instrument panel has also been restored and is ready to go into the pylon but at the moment we lack his seat and some valve handles”. 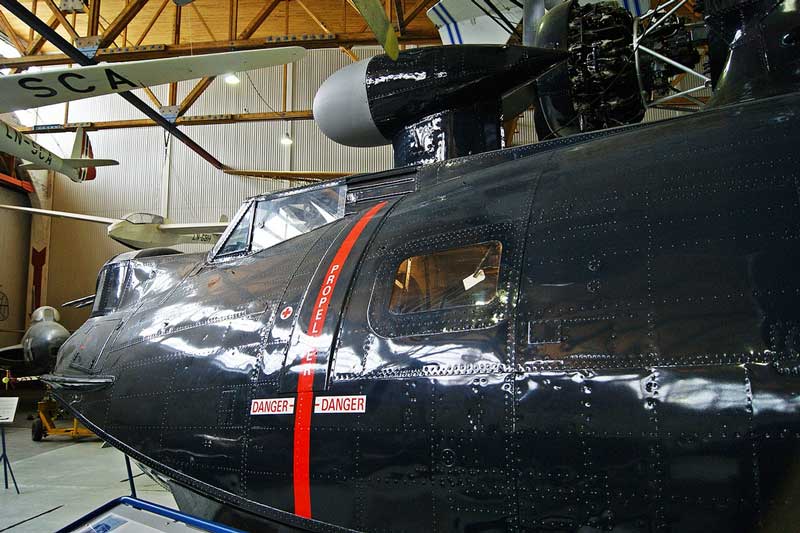 In the USA, the Wright Cyclone-powered ‘Super Cat’ N287, originally US Navy PBY-5A BuNo 48287, has been dismantled and moved from its long term home in Florida to American Aero Services at New Smyrna Beach, Florida.  It is currently stored like a large Airfix kit of parts and looks rather weather beaten in places after its long period of inactivity since being sold by its previous owner Charlie Clements who kept it in pristine condition and flew it regularly.  Hopefully, American Aero will soon have it back in tip-top condition for new owner Cavanaugh Flight Museum of Addison, Dallas, Texas.

The US Federal Aviation Administration has an on-going exercise to clean-up the US Civil Aircraft Register by cancelling redundant registrations.  There are still quite a few Catalinas in the register that have not been extant in the USA for many years and the latest batch of cancellations on February 4th this year are a case in point.  On that date, no less than seven Catalinas that had been previously de-registered were formally cancelled.  None of them had physically existed for several decades!  The first two aircraft were both ex-US Navy PBY-5As, these being N68745, formally BuNo 48265 which was sold to the Dominican Republic forces in the very early 1950s and N74694/BuNo 46631 which was sold to a civilian operator in Brazil at the end of 1950.  The latter aircraft was written off in a crash in Brazil on May12th, 1954.  The other five aircraft were all ex-US Navy PBY-6As that were sold to the Aircraft Instrument Corp, Miami, FL in 1956.  All were subsequently broken up for spares.  Their US civil registrations and US Navy Bu Nos were N7880B/46639, N7878B/46650. N7877B/46659, N7883B/64005 and N7884B/64033.

Finally, back to the Antipodes and Australia where a number of projects are under way.  Currently the only ‘flyer’ in the area is the PBY-6A VH-PBZ of Historic Aircraft Preservation Society (HARS) at Albion Park, Illawarra, NSW. Sadly, the proposed appearance at the event to mark the 75th anniversary if 1 Flying Boar Repair Depot (1 FBRD) at Lake Boga had to be cancelled because of poor weather conditions, VH-PBZ being a VFR aircraft only.  This was a great shame given the connections between Lake Boga and the RAAF Catalinas in WWII although at least visitors could view the local museum’s composite Catalina based on RAAF PBY-5 A24-30.  On November 26th last year, the RAAF Edinburgh ‘family day’ event saw VH-PBZ take part in a unique formation of RAAF maritime types – Lockheed P-2 Neptune and P-3 Orion and the new Boeing P-8 Poseidon.

Elsewhere in Australia work continues on PBY-6A VH-CAT at Bankstown Airport on the outskirts of Sydney, NSW.  Both engines were successfully run on January 14th under the supervision of engineer Mick O’Grady and work has been continuing to refurbish the interior with new seating and restraints in the forward cabin, previously the home of the navigator and radio operator.  The aim is to achieve a ‘Warbird Certificate of Airworthiness’ to allow the carriage of passengers.

The PBY-5A Catalina, ex-N7238Z and known as ‘Our Girl’ by its owners Rathmines Catalina Memorial Park Association Inc continues to be worked on by a keen workforce in the Rathmines area of Lake Macquarie in NSW.  The group has recently sourced a genuine R-1830 engine work stand which has been refurbished.  It was displayed at last October’s Catalina Festival complete with a partially assembled Twin Wasp mounted upon it.  The Catalina’s hull has been the subject of a great deal of internal work.  Much post-war equipment including wiring and electrical equipment has been stripped out as part of a project to return the hull to original configuration.  Items required include one pilot’s seat for the cockpit, a seat for the engineer’s position in the pylon and corrugated walkway components for the rear hull.  The inside of the hull is being pressure cleaned with water after which it will be primered and painted in olive green.  The wing centre section is also being cleaned at its storage site.  The tail is being restored at RAAF Edinburgh along with the port engine.  A supply of aluminium has been sourced for use in skin repair work and work is underway on the cockpit area.  Other projects will include restoration of blisters and a bow turret.